Automating the verification process is one of the most effective methods a state can use to ensure we register only eligible voters while creating the most up-to-date and accurate voter lists possible. Components of the automated verification process, sometimes included in automated registration, use additional layers of verification and everyday transactions to create accurate records for eligible voters. The requirement of documents, verification with the Secretary of State’s office, reductions in human error, and automatic updates to voter records are all components of AVR that, when properly implemented by administrators in the state, act to ensure those who are eligible to vote are the ones voting. This report compares states with fully automated systems to their less-automated counterparts.

Many states across the country have taken steps to modernize their election system. With these advances, states have also begun to add layers of security to their registration verification process. While some states have taken smaller steps at modernization, 18 states and the District of Columbia have enacted automated verification and registration.[1]The 18 states include Alaska, California, Colorado, Connecticut, Delaware, Georgia, Illinois, Maryland, Massachusetts, New Jersey, Oregon, Rhode Island, Utah, Vermont, Virginia, Washington, and West … Continue reading

Additional states like Pennsylvania, have taken steps to automate their verification process after the state identified several errors that had emerged on the state’s voting rolls. We anticipate that in 2019, up to five additional states will also update and automate their verification process so that 90 percent of eligible voters get registered in a secure fashion.

The map below exhibits all states in the United States with a modernized and automated voter registration system: 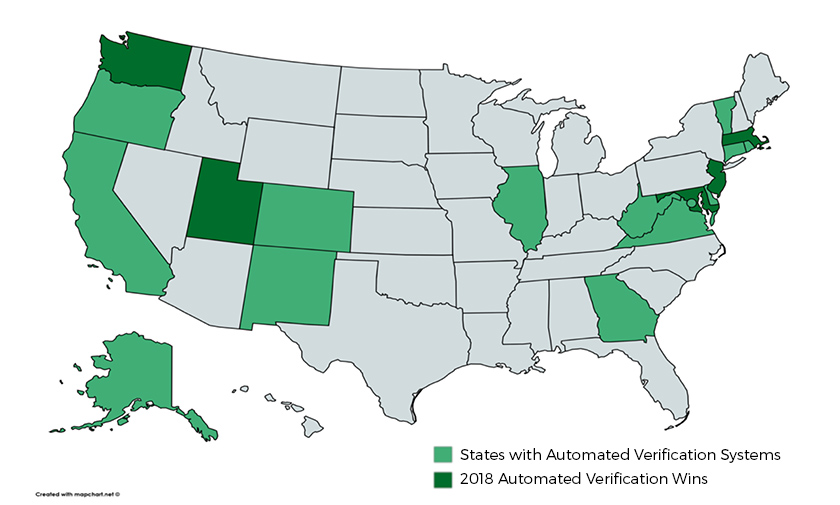 There are two key components to the automated verification process. First, DMVs upgrade their technology so that they generate a pool of customers that come through the agency each day. Voters that a) are U.S. Citizens, b) meet the age requirements for registering to vote and c) are residents of the state, get put into the voter registration category to be sent to the Secretary of state for additional verification. The second key component of an automated process is that eligibility is determined before voter registration is mentioned. Voters that do not meet the eligibility requirements are never asked to register to vote, thus eliminating the potential for ineligible people getting added to the rolls at state agencies. People who meet the basic registration requirements are then sent to the Secretary of State, who then conducts an additional layer of verification, checking to ensure that each voter meets all the eligibility requirements in the state. If a citizen is eligible to vote, their records are sent to the county and they are added to the voter rolls.

The degree to which a system is modernized matters. Some states fall short of a fully automated verification process, which makes them vulnerable to human errors. As discussed below, California’s system has produced errors, albeit fewer than before they upgraded their system, because the verification system was not fully automated.[2]http://www.latimes.com/politics/la-pol-ca-dmv-voter-registration-error-20180905-story.html

Other states, Oregon for example, have fully automated their voter registration systems and have the cleanest voter rolls in the country because of it. As Tim Scott, Director of Elections in Multnomah County, Oregon said, “Since Oregon’s system was implemented in January 2016, Multnomah County has added 80,000 voters at the same time as we’ve reduced temporary staff and overtime staff that used to input data from paper registration forms. Last-minute surges in registration are now smaller and manageable because voter registration activity is steady throughout the year. And third-party registration drives in Oregon now primarily focus on getting out the vote rather than registering voters on paper.” In addition to reducing paper and cost, automating the process means that typos and other human errors have been eliminated for every voter registration that comes from an automated system.

As states look to secure their voter registration rolls, their first step should be to optimize their automated registration process.

Oregon is a model state when examining what states should seek to embody with their automated policies. Oregon, as mentioned above, is the original automatic voter registration state. Since its inception in 2015, their Automatic Voter Registration system, also called Oregon Motor Voter or OMV, has successfully raised registration rates in often ignored rural counties and led to the most accurate voter rolls in state history.[3]“Oregon Motor Voter: Cumulative Program Statistics Through December 31, 2016“. 2018. sos.oregon.gov

More importantly, Oregon’s system includes verification steps that go further than most models of automatic voter registration, and Oregon layers those steps throughout the entire registration process. When a transaction begins and an individual presents identification, the DMV employee registers the type of identification shown within the system.[4]https://legiscan.com/OR/text/HB2177/2015 The presented identification is used to verify an individual’s citizenship status and other eligibility factors, like age. That identification record is used to generate a voter registration application for all eligible persons that is then electronically transmitted to the Secretary of State’s office. The Secretary’s office cross-references those applications to their eligible voter list and ensures that no one is registered twice.[5]Ibid.

This process also automatically updates the information of existing registered voters to ensure their information is accurate, eliminating the potential that a voter gets added to the rolls multiple times in multiple locations. Once a new voter has been registered, the Secretary of State allows them a 21-day window to return a postcard that allows the individual to decline registration or select a party affiliation.[6]Ibid.

The postcard also acts as a confirmation so that Oregon knows a voter lives where they say they live. If the postcard gets returned, the voter is not registered. If a voter wishes to decline, a voter must sign the card upon returning it. This adds another layer of verification to the process, ensuring that those who wish to decline to registration have a signed declination to document their registration choice.

Oregon’s system offers multiple verification points, first in verifying an individual’s citizenship, cross-referencing that with the Secretary of State’s office, removing the manual input of information, which reduces the potential for human error. Through its postcard system to address registration choices, Oregon offers another opportunity to verify the accuracy of information and to maintain clean voter rolls. All states, not just California, should all strive to implement Oregon’s model of AVR for its effectiveness in list maintenance, it’s security, and all the layers of verification it brings to the registration process. California should serve as a lesson that voter registration processes work best for those who can and should be registered to vote, when we fully automate our systems and employ as many verification steps as possible.